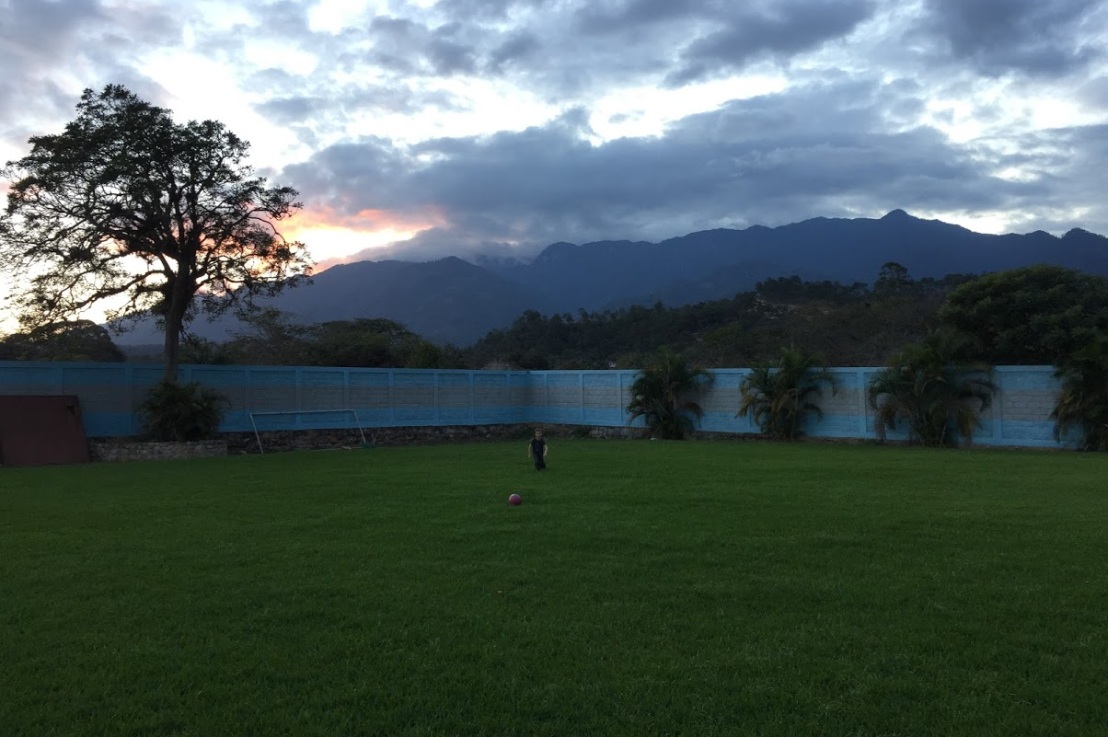 It’s amazing how much Honduras feels like home.  And yet, there are still many things very foreign about it.

Sam and Evie don’t look out of place to me amongst their Honduran classmates, as they seemed to be at first.  Sometimes I can’t distinguish Evie’s voice from her little friends when they are playing together and speaking Spanish… although keeping up with their conversation is increasingly taxing on my old-man, overly-plasticized brain.  Watching Sam make brand new “inventions” with discarded electronics brings me both nostalgic feelings of my own childhood and an anticipatory pride for the person he is and is becoming.  The rock wall, banana trees, and blackberry bushes that once stood out as foreign now blend right in and serve as support structures for his electrical wiring.

Stephanie is in the middle of 6 weeks in a row of brigades at the clinic, and it is way less challenging than last year (for me anyway).  We know the routines, and we don’t have to think as hard to plan for the daily requirements of running a family.  It’s certainly not that we’re not busy, but the stress I have had before about being busy with new things has given way to a sense of purpose in execution without becoming monotonous in the least.  We’re in a sweet spot. 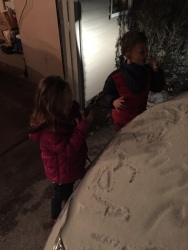 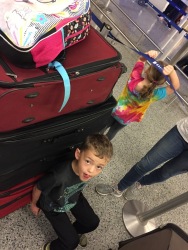 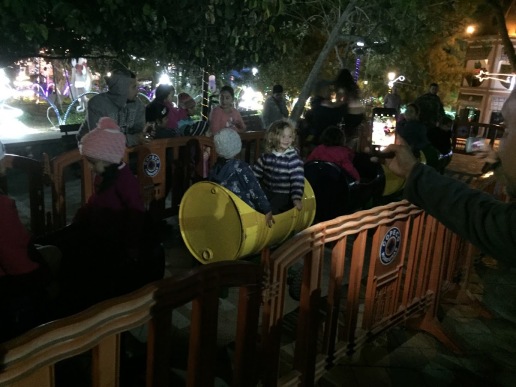 At school, the documents that I saved from last year are finally becoming usable in their original form.  I can see on paper (and recall vividly) the progression I went through as I navigated the learning curve associated with being a first-year teacher.  At the very least in all of this, I have a tremendous new-found respect for teachers, and at best, I hope to seek to fundamentally understand people better as a result of this experience.  There’s a great quote hanging up in one of the classrooms at school from the psychologist Carl Rogers:

“Being empathetic is seeing the world through the eyes of the other, not seeing your world reflected in their eyes.”

I hope I can do that better going forward.

We got to go back “home” to Michigan for Christmas, experience the cold, see some snow, eat Chick-fil-A, and hang out with a lot of friends and family.  Arguably, friends and family are a great definition for “home,” but now there are a lot of those wonderful people surrounding us in Honduras, too… this is tricky, and continues to confuse me.  Getting back “home” to our house in Honduras felt right, but it wouldn’t be the same if we didn’t later get to go hang out with all our friends who had gone separate ways for Christmas break.  I just really struggle with the ideas and feelings surrounding that word “home.”

I mean, I love the four seasons, but it’s also awesome to be able to ride a motorcycle in January.  I bought a small one last year, and finally learned how to ride it.  Now fundamentally, motorcycles are dangerous and awesome, which makes me a perfect fit for one.  However, as it turns out, motorcycles are actually able to make some people look even nerdier than they were before.  I’m not sure how that’s possible, but that’s just a reality I have to live with.  And it did come in very handy when we had to leave our car with the mechanic.  Stephanie was not scared at all to ride on the back of it… with me driving… in Honduran traffic.

But so much is still so foreign, and I’m reminded of it regularly.  Some Honduran music still makes me feel like I’m on vacation, even though the truth is that I’ve never worked harder in my life.  There’s snow all over my friend’s pictures on facebook, but only about 3 of my 32 eleventh graders have ever even seen snow in real life.  I know the names of most of the exotic fruit here now, but I still sometimes find freakishly big foreign fruit I’ve never seen before.  But then I realize, it’s not the fruit that’s foreign, it’s me.  The cows that “get in my way” on my drive to school were walking that same path long before the road was even paved there, and my car is really the invasive one here.  And even though I know exactly what I’m doing in town, I still get the stares that remind me I’m something of a novelty… even though there’s more of us gringos here now than ever.  And don’t get me wrong… I don’t blame people for staring… I do exactly the same thing when I see a gringo that I don’t know in town.

When God began to call our family to Honduras, he gave me an unsettled feeling with our life in Michigan… a discontentedness.  Even though everything was pretty textbook American dream, I felt a lack of depth.  Now in Honduras, I’m absolutely content in my sense of purpose and confidence of calling here, but I’m surprised to find that a certain similar lack of depth remains.  If I look to the deepest levels of myself I think I can access, I don’t believe there’s anything anywhere in this world that can fill this void… no person, no place, no thing.

On Wednesday, I have to go to Tegucigalpa to renew my Honduran residency.  It’s a timely reminder of my temporary status here.  And that’s not very different in the US.  There’s the same paper trail there that ultimately just says that I happened to be born there.  While I have great pride in both countries, neither of them define me.  Furthermore, not even this physical body I was born into defines me… which I find reassuring at this time in life as my bald spot begins to take on an existence of its own.  The fact is that we are eternal creatures meant for an eternal home with Jesus and our Father.  The Spirit right now seeks to remind us of that no matter what country we reside in or what body we are stuck in.

Our circumstances and our bodies and minds are gifts he has given us in order to fulfill our purpose and carry out his will in this world… a will that we can often catch glimpses of, but that sometimes defies our stereotypes and prejudices and requires the faith of a child.  And while these things are gifts, it’s very important to recognize their limitations.

After Paul gives the Galatians the fruit of the Spirit, he says in 5:24, “Those who belong to Christ Jesus have crucified the flesh with its passions and desires.”  Our physical bodies limit us, they hold us back.  He continues in verses 25-26, “Since we live by the Spirit, let us keep in step with the Spirit.  Let us not become conceited, provoking and envying each other.”

Isaiah 5 speaks of the risk of destruction from trusting in our own plans.  Verse 21 says, “Woe to those who are wise in their own eyes and clever in their own sight.”

And I don’t know if you’re allowed to critique the Bible as a self-proclaimed good Christian, but I think Proverbs can often seem disjointed if not schizophrenic, so I really enjoy the exceptional flow in Proverbs chapter 3.  Verses 5-8 say, “Trust in the Lord with all your heart and lean not on your own understanding; in all your ways submit to him, and he will make your paths straight.  Do not be wise in your own eyes; fear the Lord and shun evil.  This will bring health to your body and nourishment to your bones.”

I think there are real connections between faith and physical well-being.  Just like the Jews couldn’t have understood germ theory, but prevented disease by observing the “religious” practice of hand-washing.  Just like we are seeing how bad stress is for your body as we discover the health benefits of meditation (prayer).  Now, there is much more to prayer than just that, but some of these things we have confirmed through human study.  There is no doubt in my mind that there will be more to be revealed.  I suspect much of it, no human will be able to confirm in this life.  God knows a lot.  We would be well served to trust him.

When I struggle to make sense of where God has me, or strain to figure out where he wants me in the future, I hear him say: “Just trust me.  You’re my child.  I’ll always take care of you.  Serve me today, where I have you.  Show me to the people around you.  Don’t worry about the future.  If you don’t feel totally comfortable or at home, that is because you are not at home.  Your home is with me.  I will bring you to myself at the proper time, but for now, you have a purpose right where I have you.  Trust me.”

So I’m glad to be here, for so many reasons.  I pray that I remain glad to be wherever God leads me, and I pray that you accept his purpose for you wherever you are.  Have no doubt, there is one.  Trust him.

3 thoughts on “Just a Resident Here”