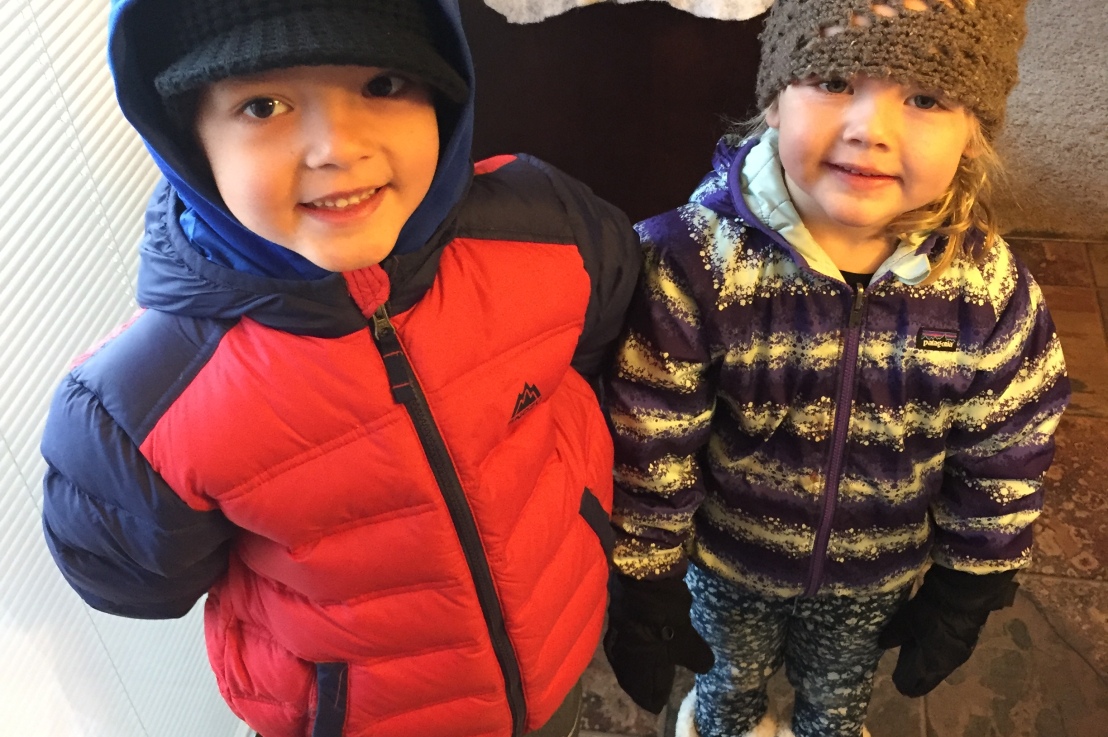 We made it to Michigan for Christmas, but not without difficulty.  And while all seems to be ok in our town in Honduras, the overall situation in the country remains dire and unpredictable.

We hit the road at 3 AM Saturday morning with the intention to arrive at a hotel in Chicago that night.  Instead, we didn’t make it back until Tuesday.

I knew it was going to be a great trip when the first thing Evie did upon getting in the van was shove her hand down in between the seats, look at me with big eyes, and say, “whatever I’m feeling, it’s sticky.”  Gross.  Get your hand out of there.

On Saturday, our van was getting close to the airport in San Pedro Sula when we ran into a road block.  Protesters have been setting up road blocks there in response to the events of the recent presidential election.  Those protesting believe that the incumbent stole the election, and there are bitter divides among the Honduran people.  Many believe their only recourse is to disrupt the infrastructure in Honduras by blocking the roads, which is extremely effective in accomplishing its goal because there are often few or no good alternative routes for traffic to take.  The mountainous terrain and underdeveloped road systems become quickly debilitated when the main arteries are blocked.

As we waited, some members of the Honduran military marched passed our van to go try to break up the road block, far enough ahead that we couldn’t see what the actual block was, but had to rely on word of mouth from passersby.  We waited quite a while, but when some national police came back the other way and told us to turn around, we decided to take their advice.  But then, we ran into another road block attempting to go back the way we came.  We pulled over in a gas station, and I forgot the promise God made to me to keep me and my family safe in Honduras.  There was no guarantee that we weren’t spending the night there.

But soon we got through, back the way we came, and took a very long way around to get to a hotel near the airport, as we had missed our flight.  We bumped our flights to the next day, Sunday.

We had to get up at 3:45 AM Sunday to catch the airport shuttle at 4:15 AM, so we could reduce the risk of running into a blockade later in the day.  Sam sat up on his knees and alertly said, “I’ll pack my animals!”  Then his eyelids slipped shut and he fell face forward back on his bed.

After a long day waiting at the airport, we boarded the plane around 1:30 PM.  Then we found out that we couldn’t take off to Atlanta because the power was down at the world’s busiest airport.  Of course it was.

We waited about 4 hours on the tarmac, and they were even nice enough to let us walk into the airport, where the kids could play for a little bit… there’s a little toy area right in the gate, which is amazing.  As the sun set out the window of the airplane, Sam exclaimed, “It’s been the whole day?!”  Yes, buddy.  The sun rose and set on our day at the airport.

Eventually, they said we were taking off to Atlanta, but we had been following along with the nightmare happening there, and we were really hoping to end up somewhere else.  I think Delta just recognized that they had to get their crew out of Honduras that night.  Several flights in and out have been cancelled since.  You see, on Sunday, while we were on the plane, the country’s electoral officials declared the incumbent the winner of the election that occurred 3 weeks prior.  This has led to dramatically increased protest activity in the days since.

As we took off out of San Pedro Sula, I was glad to be getting my family out of a difficult situation, but I felt so bad for what I knew some people were going to go through there over the next days and weeks.  I felt guilty.  I felt powerless.

I mean, sure I’m a great guy, but I knew the love I was feeling for the Honduran people was not an inherent manifestation of my carnal self.  I knew it had been implanted there by God to convict, motivate, and bless me.  To give me guilt enough only to drive positive action in the future, not to make me feel bad for being powerless.

As I felt this evidence of the prior change in my heart, Ezekiel 36:26-27 came to mind.  “I will give you a new heart and put a new spirit in you; I will remove from you your heart of stone and give you a heart of flesh.  And I will put my Spirit in you and move you to follow my decrees and be careful to keep my laws.”  Of course when I looked it up later, I found that this chapter discusses the hope for the mountains of Israel and the assurance of its restoration.  I don’t pretend to know exactly what God is doing in Honduras, only that he will fulfill his promises there, and I want to be a part of it.

So our flight ended up in Miami.  And we were there for 2 nights.  Because everybody and their brother was trying to recover from the disaster in Atlanta.  But we got a direct flight to Detroit on Tuesday, and our buddy Nate Koster gave us a ride from there.  I’m not sure anyone has ever been so glad to see Nate in their life as we were.  I also don’t know whether that says more about our trip or Nate as a person.  I love you, buddy.

The most difficult moments of our travel experience were those in which there were a lot of unknowns.  Traveling isn’t so bad if you have a plan.  But when you don’t know how things are going to go, fear of the unknown takes over and makes things miserable.